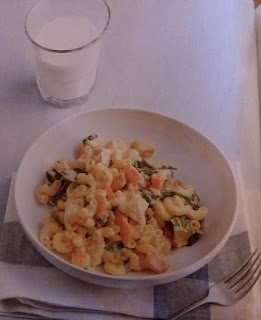 This is a picture of the dinner that I made last night. It's called "Cheesy Chicken Instant Mac With Veggies" It's made in an instant pot and if you want the recipe, let me know. What's great about it is that it has chicken (extra protein) and lots of carrots and spinach but it tastes like an incredibly creamy mac and cheese. When feeding my myotonic family I have to worry about swallowing issues. Lately it's hard for Kent to eat a green salad. I was pleased with this dish because I was able to get the greens in our meal without serving a green salad.

Sometimes people with Myotonic Dystrophy have difficulty eating and swallowing. Of all my children, Michael has had the most trouble eating and swallowing, and has had multiple episodes of aspiration pneumonia. Eventually, the only way to help him was to get him fitted with a feeding tube.
When Michael got his feeding tube, every one of his siblings said, “Oh wow, I’m so jealous.” So why did they say they were jealous? It’s because eating is so much work for my family with this disease. So when they said they were jealous, Michael said, “Well, I know where you can get one!” But despite some jealousy, the others didn’t really want a feeding tube, even though they could see an advantage to having one. Now Michael only uses his feeding tube for clear liquids but by keeping his muscles hydrated, he doesn't have choking issues any more.


The vast majority of us rarely have trouble eating or swallowing. But for most individuals who have Myotonic Dystrophy eating and swallowing isn’t something they can take for granted. Growing up, Michael could still eat and drink, but it was always difficult for him. He survived a good portion of his life without a feeding tube, and despite the difficulties that have come with having a tube permanently inserted into his body, the feeding tube has improved Michael’s quality of life. Michael’s feeding tube helps him function on so many levels that it has become a valuable trade off. We use Michael’s gravity bag and feeding tube to administer him his fluids. In our family we now have a little joke that Michael gets watered twice a day. For a long time Michael was putting just 16 ounces of fluids/water into his tube twice a day, but now he's up to 24 ounces.

The swallowing issues are because the sphincter muscles in a DM person’s throat don’t work well and this often allows clear liquids to slip through these muscles and end up in their lungs. If those liquids are water or saliva, those are both pretty much benign, and it’s not a big deal, but having that happen is obviously quite uncomfortable. As a result, myotonic individuals often have trouble staying hydrated because they avoid these clear liquids that so often end up in their lungs. Food purees are hard for them to swallow as well, and when Michael has had to endure taking a lot of barium milkshakes for some of the swallowing studies he’s done, it’s always been difficult for him to swallow. The feeding tube then becomes a great way for DM patients to get all the liquids they need without having to try to swallow them.

Michael’s tube is technically called a flush mount non-balloon feeding tube. Michael’s even written a poem about his feeding tube and he has named it “My first feeding tube.”