Myotonic Dystrophy: Doing What Needs to be Done

I can only imagine that when you have a child that has Down’s syndrome, Batten disease, or many of the other disorders that affect both mind and body, that you do what you have to do. Of course, it would be a very intensive labor of love to help them and keep them thriving. I imagine that people would think that you were awesome because of all of your efforts, and you are awesome, but you are also only doing what needs to be done.

Well, what do you do when you have a disorder like childhood or teen-onset myotonic dystrophy where your children look normal except for some male pattern baldness and muscle wasting? As far as everything that you read, it is a muscle disease.

I can tell you from my experience that the mental/cognitive effects are as devastating as the physical effects (and the physical effects are extensive from swallowing, pneumonia, weak hand movement, unstable walking, to the heart quitting). The point that I am trying to make is that many people compliment me and tell me what a wonderful mother I am. The reason that I share my experiences isn’t to brag about myself, I am trying to make a point that those with myotonic dystrophy are affected in both body muscles and their mind. So, I am only doing what needs to be done. 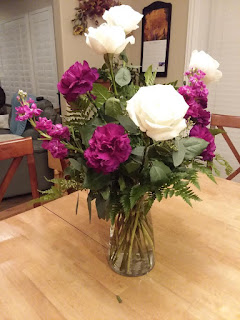 Because myotonic individuals look almost normal, most of us don’t realize the effects on their mind, including us parents. I may sound like a broken record about what I do but hopefully as I become a more skilled writer, I will be able to make the point that I do what I do because my family would not only cease to thrive, they would probably not be alive if I didn’t adapt my life in whatever ways are necessary to be there for my family.

Posted by Ann Woodbury at 9:10 AM No comments:

When I got up and looked at my text messages I saw one from Rily (today's caregiver), that he had sent at midnight. It said "I'm so sorry to text you so late but I fell off a roof a few hours ago. I got a little hurt so I won't be there tomorrow. I'm so sorry." Rily is the best caregiver for Michael and Chad and they love him. Rily usually arrives at 9 a.m. I erroneously assumed that he had told his company and that they would send over a replacement. When no one had contacted me by 9:40 a.m. to say that they had arrived I called the company, A Caring Hand. They were unaware of  Rily's injury but stated that they would do their best to get someone over to "The Brother's" house (they call Michael and Chad "The Brothers" - which is more appropriate than "the boys"). They did inform me that it would take awhile.

Therefore, it fell on me to wake both Michael and Chad or let them sleep for who knows how long. It is a long process to wake them but I have learned how to do it without having to run over to their place. I call Michael's cell phone first, then Chad's. But who knows if their cell phones are in their rooms with them. So, then I call the house phone which has an extension in Michael's room. I just keep rotating between calling each phone until someone answers. I started calling them at 9:50 a.m. It only took until 10:15 (tongue in cheek) for them to answer.

Should I pull my hair out now? 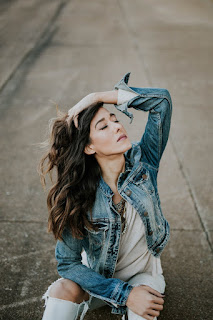 Photo by Brooke Cagle on Unsplash

Stimulants are so important in their life. Chad takes ritalin and provigil upon waking, after I talk him through getting out of bed and getting it out of the safe (previous caregivers have stolen these street value drugs so they have purchased a safe). Michael takes extended release ritalin and provigil, again I walk him through waking up and getting it out of the safe.

After they get these medications into them and I walk them through the process of getting into the front room they use their airway clearance vest. This is a device made by Hill-Rom that shakes the bedoogle out of them for 20 minutes. It's really incredible because they can cough better and breathe better if they use it 2 times a day. But one of the percs of it is that it shakes them so much that they can't fall back asleep (well, truth be told, Michael has fallen asleep with it on once).

Once they have taken their stimulants and been shaken for 20 minutes they can usually stay up to get breakfast and get on with their day. I have taught them to look out for each other because invariably they will fall asleep even after taking their stimulants. So, I keep in touch with them for the first half hour to make sure that they stay up.  But after that half hour I am able to get on with my day.

When the cargivers show up at 9 a.m. and get them going then I don't have to do all of this. You can see why I worship the caregivers :)

Posted by Ann Woodbury at 12:14 PM No comments:

I am just jumping in here midstream. If you want the backstory, I do have my story written in manuscript form. Let me know if you are interested in a copy.

Michael has worked with Vocational Rehabilitation (Voc. Rehab.) since 2002. Voc. Rehab. hung in there putting him through college and he graduated in 2015 (13 years of college) with a Bachelor's degree in Mass Communication. Except for a 4 month job at a local high school he has not had any employment since graduation. Since Voc Rehab's purpose is to get those with disabilities employed their work with Michael isn't finished yet.

Due to Michael's Myotonic Dystrophy and the effects on his brain (Acquired Brain Injury) Michael does not have any follow through or motivation to pursue employment. Voc. Rehab. has finally realized that Michael needs a job coach. Of course, they only realized this because of my advocacy. After trying and failing for over a year to get a job coaching company to work with Michael, I got involved.

It is such a complicated dance that has to happen. Voc. rehab. wants Michael to do the research on job coaches, expecting him to call all of them and choose the one that he likes the best. Of course, he won't follow through. If I make it happen I would have to  get him on the phone with me and insist that he make the call. Then I would have to interpret for him and I can't even understand him, much less interpret for him. It is just easier for me to do it.

I went online and the second place that I went to was http://www.gochrysalis.com/

The picture on their home page was this:

If you know Michael, you know that he is a big superman fan.
The decision is made. How do you like my research?

Posted by Ann Woodbury at 9:45 AM No comments: