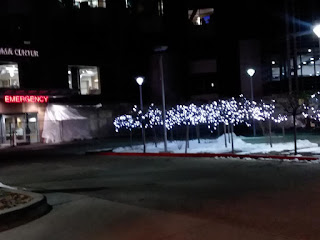 This last week I have been up at the U of U E.R. for 2 nights, Dec. 1 and Dec. 5 with Chad and Michael respectively. We think that we are almost due for a frequent user discount :)

First Chad got the stomach/diarrhea virus and then he gave it to Michael. They likely got it from a caregiver since no one else in our family has had this bug. Neither one could stop throwing up even when we gave them Zofran (Rx anti-emetic), it was also coming out the other end. In both cases when I called Instacare, they asked a few questions and told me to take them to the E.R. Once they were hooked up to an I.V. and given intravenous Zofran, they finally stopped throwing up but by then they were so dehydrated that they had to be given 3+ liters of I.V. fluid. They are both now home and both are gradually improving. However, I'm exhausted.

Chad was scheduled for a pacemaker tomorrow but because he hasn't fully recovered they have had to postpone it to later this month.

Constant medical situations are unavoidable when you have a family with myotonic dystrophy.
Posted by Ann Woodbury at 3:21 PM